Some things in life are unexplainable–Believing in God is one of them. 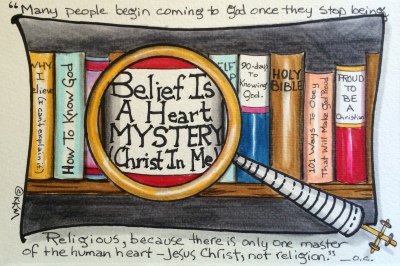 Belief (especially belief in an invisible power) is not something we can conjure up, and for me, if I’m really honest, It’s something I wouldn’t want to conjure up.  Why?  Because belief in God and Jesus Christ as Lord and Savior of my life makes no sense and at times I’ll even get a twinge of cynicism when I hear certain proclamations about Jesus.  I don’t know why that is but it’s probably because I’m human and my human nature wants physical, visual, explainable evidence, not this “just trust me” stuff.  I hope you are not offended by this.  I’m not trying to be offensive.  I’m just being real–I felt the twinge today, during church!  When that happens it kinda scares me, but then I’m reminded that it’s not up to me to bring this “belief” thing to a conclusion anyway.  It’s up to God to finish what He started in my heart.  So, when I feel that twinge, I just throw it right back at him and ask Him to deal with it.  It’s only Jesus that can master the “belief” in our hearts in a way that brings goodness, kindness, faithfulness and so on . . . everything else in the name of beliefs is harsh, judgmental and unkind.  (I know, because I’ve been a VERY religious person, I mean VERY!  If you’ve known me very long, you know.)

I am grateful that Jesus saw potential for me and began the miracle of belief in my heart.  Now, through His indwelling Spirit, those cynical thoughts don’t have a place to take root and grow.  My belief is secure.

P.S.  Everyone has beliefs whether you believe it or not–even atheists believe something–but that’s another story.

One response to “How Did That Happen?–Belief that is! (My Post for July 18–late)”