Prayer, it’s been a mystery to me for most of my life, but I haven’t given up on it. I’ve come to God with every one of these “prayerattitudes” (cool new word don’t you think?) and all the combinations possible, but I must say that The Surrendered has been almost impossible for me until I began to understand that it–prayer–is about redemption. 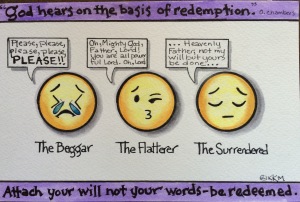 Pray with redemption in mind

God is interested in the redemption  of a situation, redemption of an earthly or Heavenly relationship, redemption of a person, redemption of a sin . . . The redemption is endless. In this light, “answered” or “unanswered” prayers began to take on a whole new meaning to me and The Surrendered will became easier. I still don’t understand it all, but from this perspective I can see a little better how God works everything out for good for those who are called.