Sarcasm and joking is my bane.  Sometimes I don’t catch it in time and an unfiltered comment slips out. 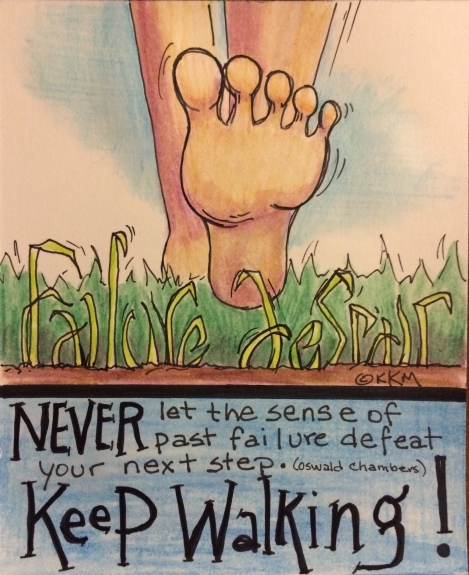 One foot in front of the other, don’t stop moving forward.

Recently I joined the gym, and even more recently, in a desperate attempt to stop the effects of slowing metabolism, I joined an exercise class that meets on Saturday mornings.  I’ve gone 2 or 3 times now.  Last Saturday, a seemingly cranky older gentleman was beside me.  He looked familiar, like someone ‘important’ in town, but I couldn’t place him.  (If you think I’ll tell you who it was I won’t, all I know is I’d met him before, more then once, just not at a gym or in gym cloths.)  Anyway, we were done with our grueling workout and getting ready to stretch but all our equipment needed to be put away.  Everyone had returned their bands to the band stand beside me and this gentleman started putting the stand away.  He needed to go in the closet that was behind me.  I politely opened the door.  While he was still in there I had one of my ‘foot-in-mouth’ ideas and in an attempt to make him smile closed the door slightly, than peaking in said, ‘Would you like to come out of the closet?’  In short, he didn’t smile, I apologized, he didn’t accept, he left crankier and while the instructor said ‘good-bye _______’ as he walked out, I’m thinking, ‘Oh, T H A T ‘ S who he is!’

Although this is a somewhat trivial incident, and it wouldn’t matter to me who it was I did it too, it has haunted me and illustrates just how easy we can go into despair and feel a sense of failure.  We’ve all lost sleep over something we said, did, didn’t do or couldn’t do.  Never would I want to offend someone…I was joking with him yet it fell flat and I wake up thinking about it, saddened.  That was a prank I would have pulled on one of my brothers.  In this case I have some options, don’t go back to the class, (and let fat take over my body) go back to the class and eat crow, (I hate the taste of crow) or pretend it never happened (come across rude).  So far, every night this week I’ve had to put it in God’s hands.  I’m going back this next Saturday and I’m going to eat crow–unfortunately it probably won’t be the last time.

It is amazing how many times in life we can feel like a failure.  Maybe we spent the day being lazy when we had a ton to do than feel guilty, maybe we hurt a friend or family member or THINK we hurt them, and loose sleep over it, maybe we forgot something on a bid for a job but can’t go back and add it so we stress over how to approach the situation, maybe, maybe, maybe….the list goes on.  Fill in the blank.  All I know is, regret, failure, despair–they’re all a part of our lives but they don’t have to cripple us.  Like Jesus said to the disciples after they slept while he wept, ‘Get up, let’s get going..’  So we ‘slept.’  There’s forgiveness.  There’s new opportunity.  Forget the past, move forward.  Don’t let the enemy steal your life.  Keep walking–with God.

3 responses to “Take the Next Step”